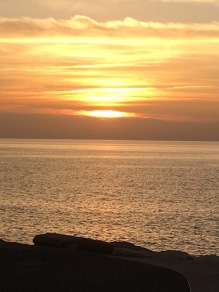 I’ve always wanted to go to Israel, ever since I read Leon Uris’ book Exodus back in the late 60s. I even dreamed of going to work on a kibbutz when I was in my late-teens, but wars and life got in the way.

And then, this year, I finally got my chance.

But I was scared. Although I’ve travelled with friends and family since my husband left me, this would be the first time travelling completely on my own – albeit as part of a tour group.

So I sat down and went through my fears.

1) What if I died on the trip?  Well… really… if that happened, I’d be out of the picture so it wouldn’t matter, would it?!

2) What if I got sick on the trip? This one did give me serious pause, because the opportunity to book the trip came AFTER Trump had made his pronouncement about moving the US Embassy from Tel Aviv to Jerusalem.  Given the violence that followed, the Canadian Government put out an official warning advising Canadians not to visit.  Because of that warning, my health insurance would now only cover if I got sick or injured myself  ‘naturally’. (Eg.  Fall and break my leg.  Heart attack.) Should I be injured and need care following a terrorist incident, I would be on my own financially.

That was a huge stumbling block.  The money I have now, barring government pensions, has to last for the rest of my life, so although I am relatively comfortable, I can’t take too many risks.

My daughter is my executor, so we had a long talk.  What if I did get injured in an attack?  What if the cost of care and returning me to Canada wiped out most of my money?

She’s done a lot of travelling, knew how important this trip was to me, and urged me to go.  I had lived in London through the IRA bombing campaign when it was at its height, and since 9/11 I have travelled to France, the UK, Germany, the US and Spain – all places where there’s been terrorist activity.  What were the chances?  Slim indeed, but still a chance.  But then again, there’s a good chance I will be in a car accident every time I drive on the roads in this city!

This was a very personal decision.  I know many of my friends would not have made it. If you find yourself faced with a similar situation, you need to think very carefully about how your future might be impacted.

3) What if I missed connections?  I was travelling in the wintertime – what would happen if fights etc were cancelled due to weather?  That can happen any time – but I had travel insurance and a credit card.  As long as I didn’t panic, I would be okay.

4) Believe it or not, what scared me the most was the idea that I would be on my ‘own’ for a week when I was with the tour group.  Part of the joy of a holiday – for me at least – is sharing the experiences with someone, whether it’s eating meals together or discussing our likes or dislikes on a visit to a museum or stately home etc.

What if everyone else were in couples? I’d feel so isolated and obviously single, wouldn’t I?  What if – what if – no-one spoke to me for a whole week?  What if I had to eat alone at the hotels? It was almost a visceral fear like being back in High School.

But when I realized that was my worst fear – over and above being caught in a terrorist attack – I gave myself a good talking to.  Was I really going to give up on visiting a country I have dreamed about for decades because no-one might talk to me?

You know what?  I had one of the best trips of my whole life.  Yes, most of the people were in couples or families – Canadians, Brits, Americans and Australians. (There was one other single woman there – a totally inspiring Australian lady – who has had the most amazing adventures alone. )

Of course people talked to me and I talked to them.  Apart from that first evening and first breakfast, I never ate alone and had plenty of people to chat during the day.  When you’re on your own, people seem to make an effort to ensure you don’t feel left out.  It’s not High School any more.

So, if you have a dream country you’ve always wanted to visit, but no-one will come with you – itemize your fears.  Are they realistic?  What is the worst thing that could happen to you?  And if it’s something you can live with, go for it!

2 thoughts on “Travelling Alone As A Single Woman”