‘Why do you have a spark plug on your Xmas tree?’ my son-in-law asked last weekend. 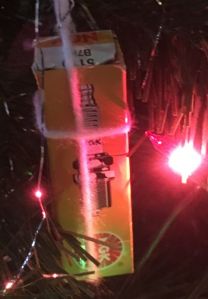 Ah… well… since 2005, every trip I’ve ever taken with friends or family, I’ve bought a Christmas tree decoration as a memory of that trip.

A few years ago, a friend and I were in Guernsey during the 60th anniversary celebrations of the island’s liberation from the Nazis.  The island held a parade where the islanders dressed up in uniforms and clothing of the time.  A rather dashing ‘dispatch rider’ – doesn’t a uniform really make a man?? – on a vintage motorbike stopped beside us, switched out his spark plug and handed me his old one.  That, I decided there and then, would be my Xmas memory of that trip.

One of the hardest things I had to do when sorting through the 37+ years of ’stuff’ that we had collected during our marriage, was figuring out which Xmas decorations to keep or discard. My ex’s sister had given us some gorgeous ones for our first Christmas together in 1977, including some silk horses I adored.  I remember the excitement in my heart the first time I hung them. But I couldn’t take them with me.  Those memories were too painful.

Culling each and every decoration was like culling each year of our marriage. In the end, I kept only the decorations from  trips without my ex, plus one belonging to my mum and dad which they’d bought in Germany in 1948.  I gave the handmade ones my kids had made when they were young back to them.

The rest, I left behind.

In 2015, I couldn’t contemplate putting up a tree.  But I had a granddaughter for whom Xmas was magic, so I strung up a set of lights and hung some stars from it. Each star represented someone who had helped me through the nightmare.

That year, a friend, whom I’ve had since before I even met my ex, cross-stitched me a banner that read ‘Happy Christmas’.  She wanted me to have something new, something I didn’t associate with my ‘married’ life, that first, hard, Christmas on my own. I cried my eyes out when she gave it to me.  After months of feeling worthless, stupid, of wondering if life was even worth living, I looked at the love in every stitch of that decoration, and…  well, she’ll never know what her gift meant to me.

In 2016 I moved into my new apartment and decided setting up a tree would be a declaration that I was moving on with my life.

For the past 30 odd years,  my ex and I had set up two trees every Xmas.  His was the ‘classic’ tree, decorated  with only white lights and red glass balls.

Mine…?  Although I called it the ‘Fairy Tree’,  my daughter lovingly described it as the Xmas vomit tree. Loaded with coloured lights, and every branch happily festooned with a decoration, there was nothing classic or elegant about it.

The tree itself was huge, and with only the few decorations I’d brought from our house, it looked pretty sparse.  So you know what?  Another friend went to the thrift store, found some great bargains, and every single branch of my tree was covered. Xmas vomit to the ’n’th degree! 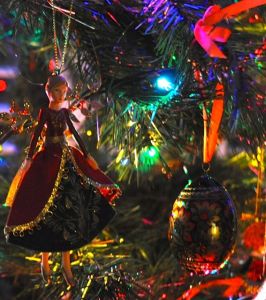 This year, there’s not a single ornament on that tree that doesn’t hold a deep and powerful meaning for me.

The Irish dancer?   Who could ever forget the sun setting over the Cliffs of Moher in 2005…

The four black labradors and one golden retriever…. How can I ever forget the love and support those amazing dogs gave me…?

The spark plug from that handsome fake dispatch rider…

When you’re divorced against your will, Xmas is hard.

All that ‘Happy and bright’ can feel very shallow.

But it’s just one day in the year.

And the lights will sparkle.